First this evening we heard from Stephanie Harper, who has recently been elected as the West Midlands Regional Chair.  Stephanie told us how she became involved in the Lichfield Guild and then to the region. Stephanie explained how she herself had wanted to know more of how the region contributed to the branches as we all contribute financially to the region. This lead her to become involved in the regional committee and eventually to her role as chair.  Stephanie told us that her first action was to invite all branches in the West Midlands to be represented on the Regional Committee and from this she hopes that through the quarterly meetings this will lead to a more proactive region.

In Birmingham we are lucky to be represented by both Heather and our own branch secretary Clare is also the regional secretary - if you do have any questions or comments for the region Heather and Clare are always happy to hear from you.

A tale of two members

We had an inspiring start to the new year hearing from 2 members Meriel Hutton and Janet Lee who told us about their 'stitch' lives and gave us a great insight into their respective journeys through both words and inspiring examples of their work.

First we heard from Meriel who revealed her sparkly knitted outfit made on her knitting machine.

We learned how Meriel finds inspiration through many things but she concentrated on her four main influences her family; places she has lived, holidayed and visited ; thrift and the Guild.

Meriel told us about family how she had learned to sew and knot from her Grandmother when growing up in Edgbaston. When her doll needed dressing granny taught her to knit socks, turning the heel and grafting the toe. without the money to buy materials Meriel learned to use scraps and recycle materials something that still inspires her today.


We saw wonderful examples of Meriel's work including the patchwork quilt she made for her parents inspired by the birds in Australia where the family moved when she was 12 years old. 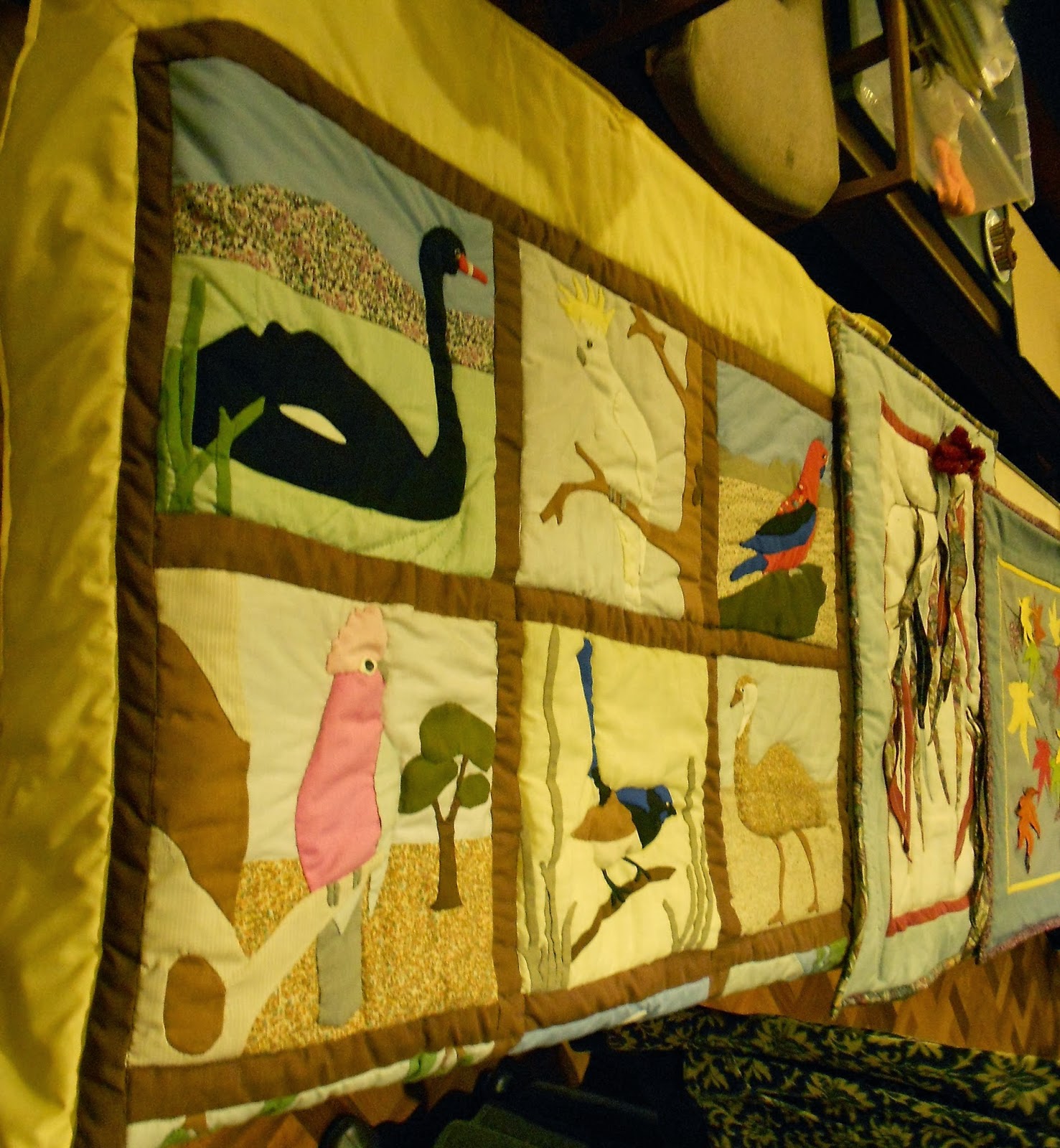 Meriel's work includes both the practical items like the  clothing and  bags and cards she produces for any occasion as well as the purely artistic  pictures inspired by the things she loves and places she has visited. 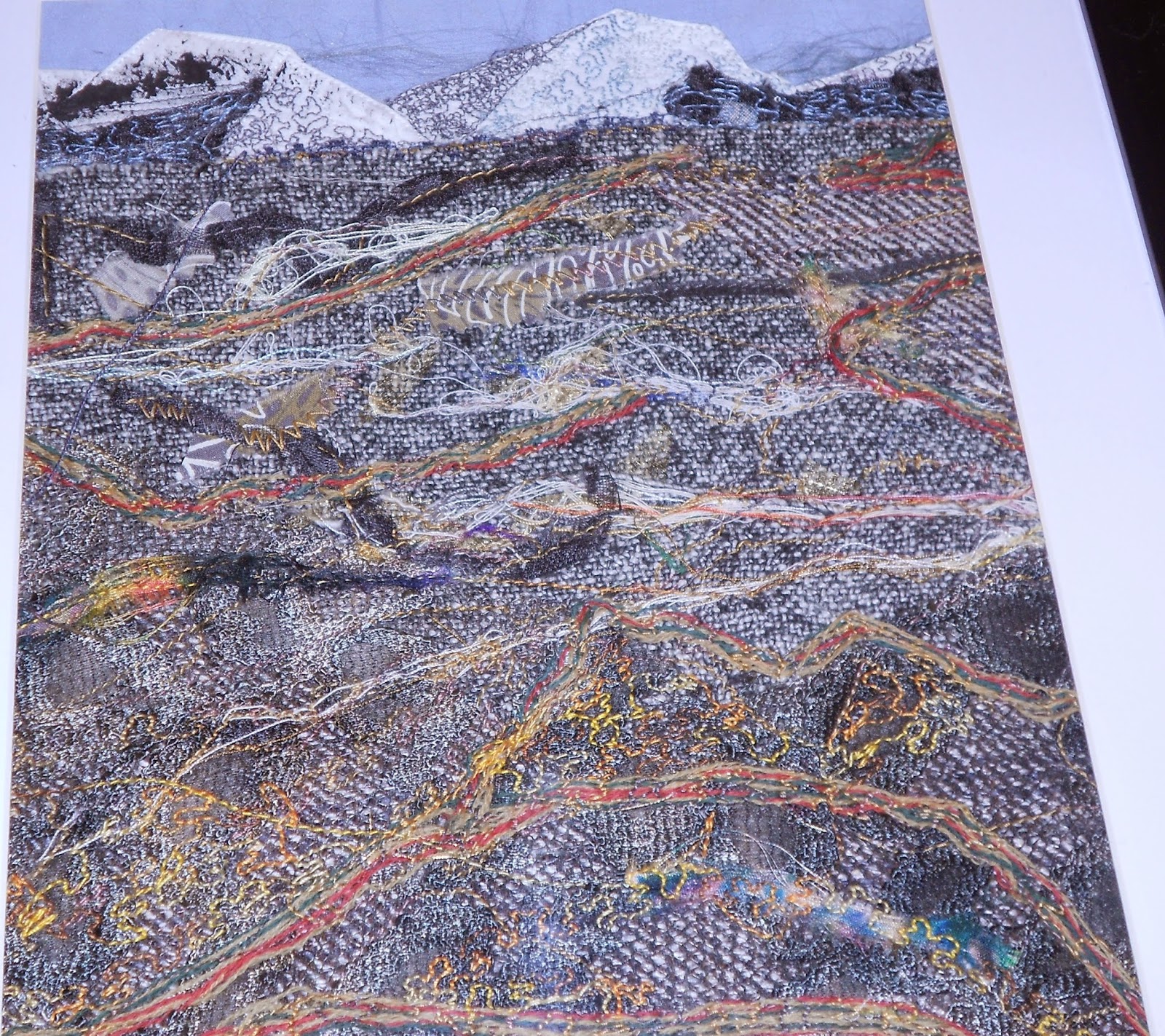 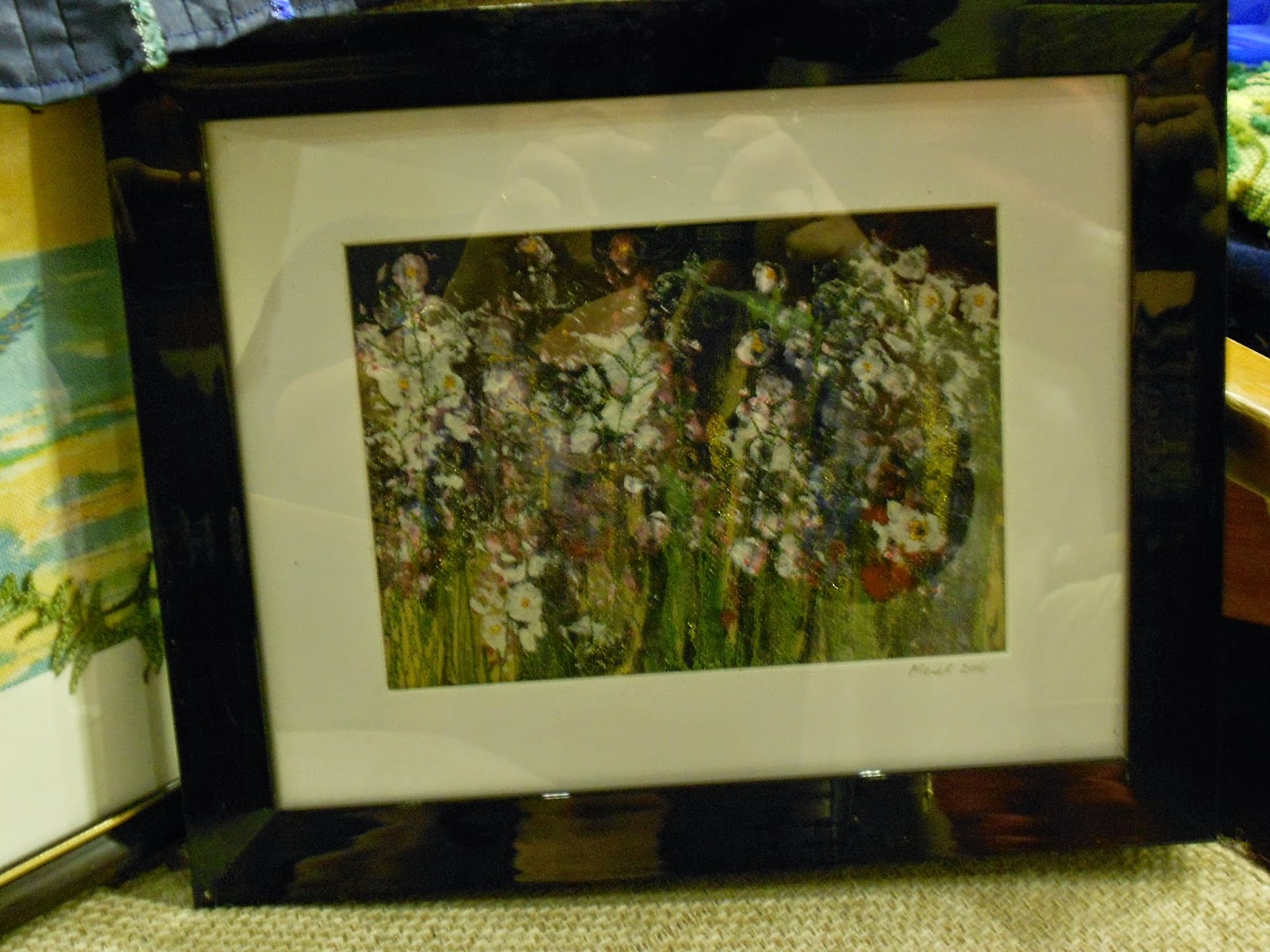 Meriel then told us that since she joined the guild in 2012 she has been inspired by speakers and day schools, other members and stitch magazine. From this she has was encouraged to enter both regional and branch competitions and was clearly a delighted winner of the Christmas competition with her book of holiday post cards.

Janet then told us about her fascinating history in craft. Growing up at the seaside in Kings Lynn and being surrounded by parks at home and school Janet was always inspired by the natural world.  Her mother made dresses for Janet and her sister and her father was a brilliant artist so both influenced Janet as did her grandmother and great aunt who she visited in the holidays.

Because of her obvious talent and interest in art Janet was encouraged by her head teacher to go to art college where she completed a fashion course studying textiles, millinery,weaving and completed the City and Guild's in Embroidery.

After working in a tailors Janet was a bout to go to teacher training when she had the opportunity to work for the BBC at Pebble Mill.  Working in the costume department Janet worked on many productions as diverse as period dramas and Doctor Who.

As her children were growing up Janet continued dress making and toy making. She was in great demand for school productions overseeing and creating costumes.

Janet continued with her C&G at Bournville college and  one of her projects
was then adapted for the alter at Lickey Church which also now houses other examples of Janet's work.

After her C&G Janet joined the Forge Mill Embroiderer's and this inspired her monk in the box.

Janet has been a guild member for several years and is actively involved entering competitions, attending workshops, contributing to Tolkien project and the Hoard Hangings for Birmingham Museum. Janet is also heavily involved with the Young Embroiderer's and led the young members in creating the Ruby anniversary hanging. 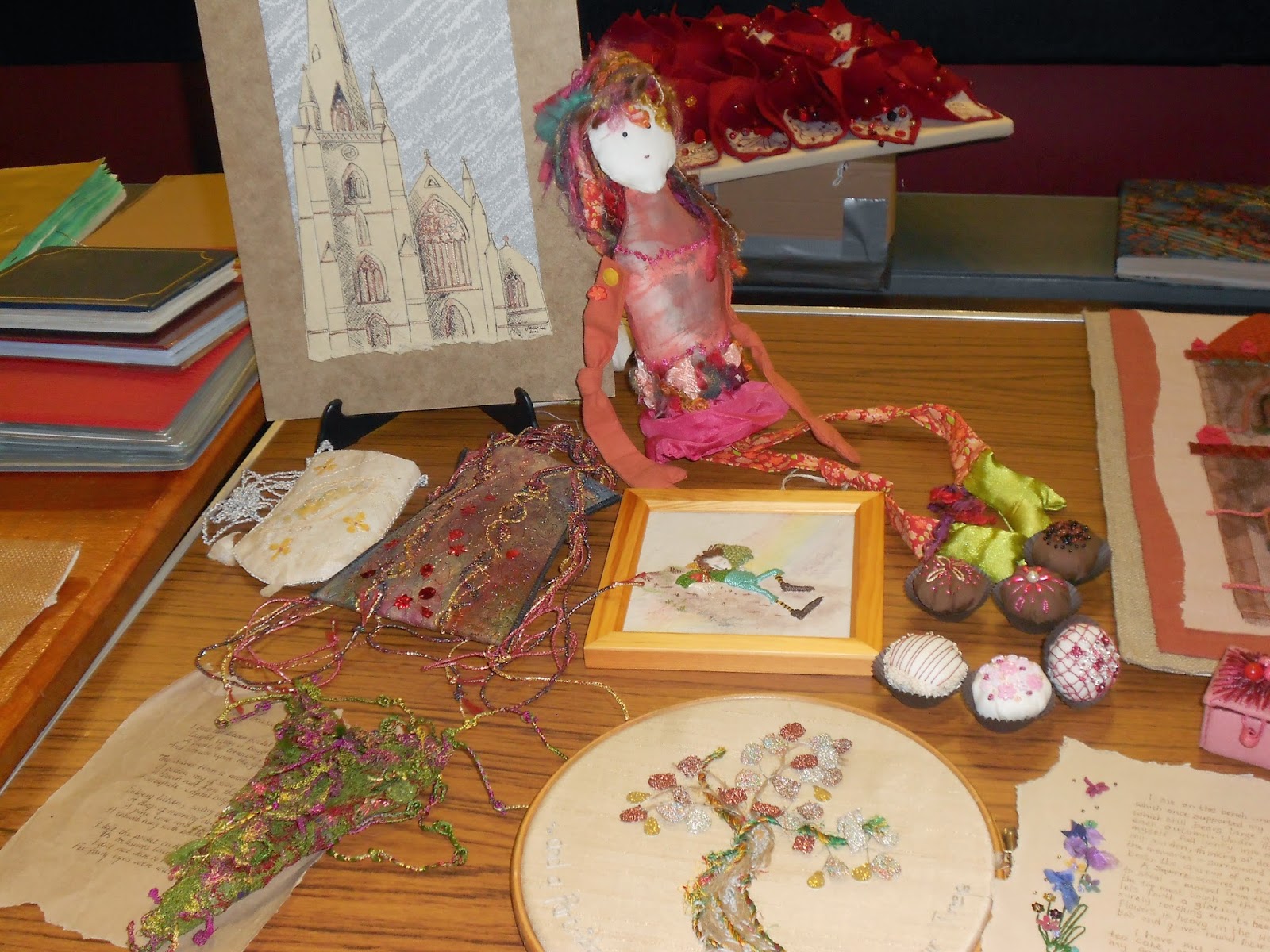 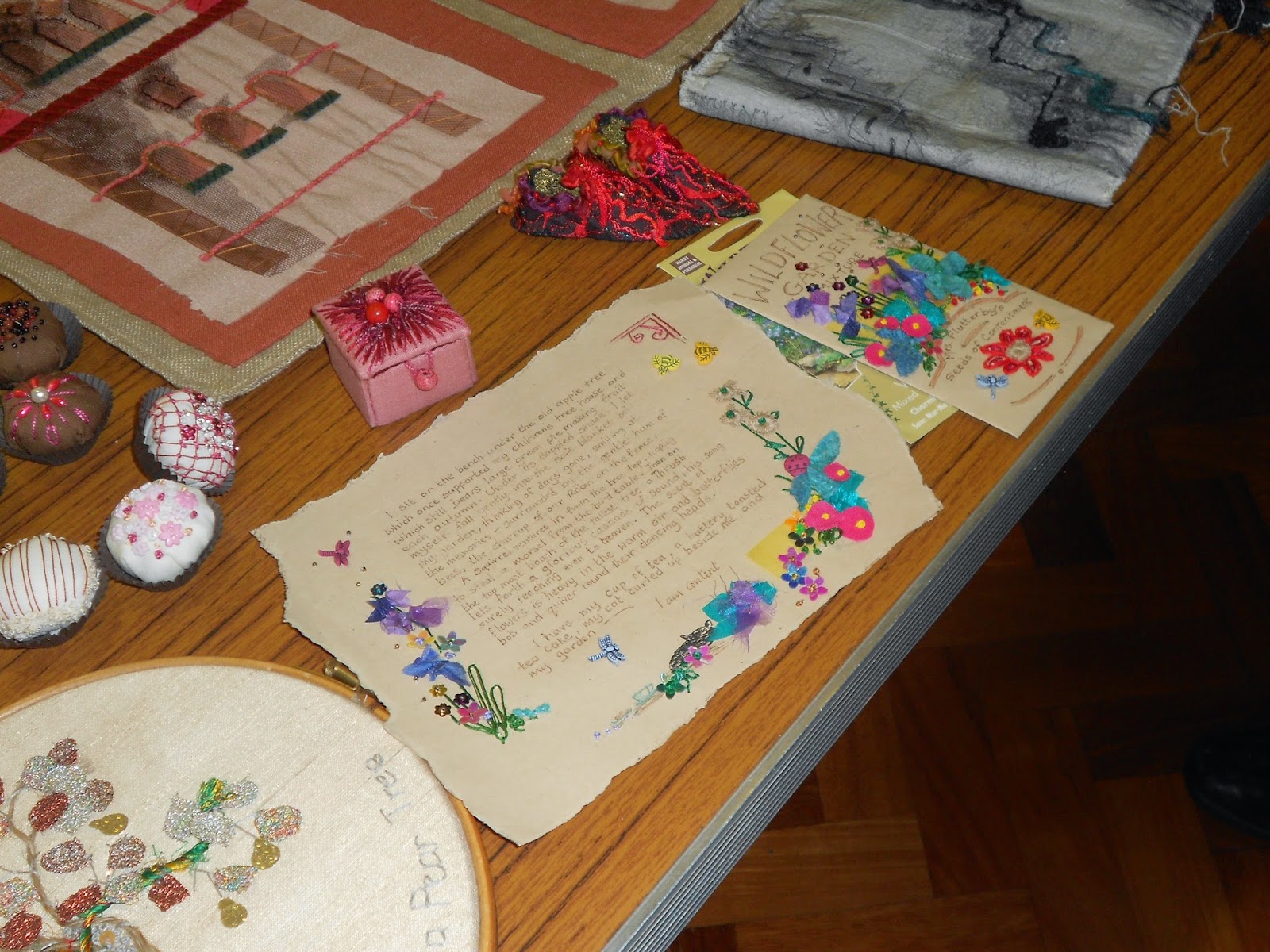 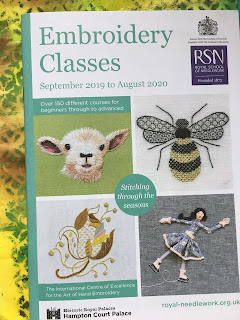 Royal School of Needlework in Brum! 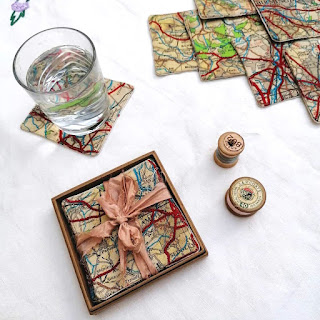 Saturday 2nd May - news round up